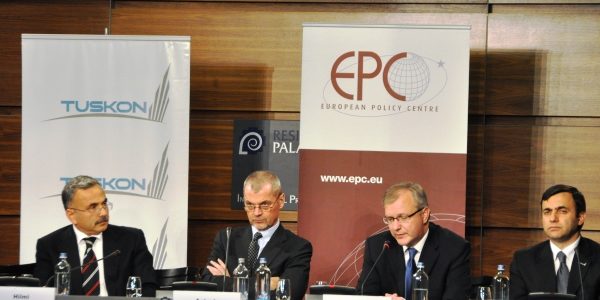 Amanda Paul, EPC Policy Analyst, began with opening remarks regarding Turkey’s relationship as the most, “Western part of the East,” and the most “Eastern part of the West.” Turkey’s dynamic energy policy includes its substantial efforts to diversify its energy sources and routes given that Turkey also remains heavily dependent on Russia for its gas supplies. Turkey is key to many EU energy security projects from the Caspian and Middle East region, including the much-discussed Nabucco project. Turkey is also engaged in nuclear projects with Russia as well as increasing green energy technology and renewable energy including solar energy, hydropower and wind.

Keynote speaker Sefa Sadık Aytekin, Deputy Undersecretary for the Turkish Ministry of Energy, spoke about the priorities of Turkey’s energy policy, which included safe, secure and sustainable and affordable energy sources. He stressed that an attractive investment climate was needed for this investment, which includes diversification as well as inter-regional gas trade. The EU is increasingly dependent on gas imports, including significant amounts from Russia. The two main components of Turkish energy policy are sustainability and secure energy as well as contributing to the energy security of Europe and beyond. The three main drivers underneath this are rapid growth in demand, high level of import dependency, and potential improvements to energy efficiency. In terms of renewables, targets for 2023 should be up to 30% of Turkey’s energy needs – currently around 7%. Integration of nuclear power will contribute to reducing Turkey’s carbon emissions and reduce dependency in the power sector – by 2030 10% of electricity will come from nuclear power. Turkey will also tap into its hydroelectricity capacities, of which 35% is utilized. Turkey is located close to 72% of world’s gas and oil reserves in the Middle East, the Caspian region and Central Asia and is well placed to act as a bridge between producers and customers.

Mr Aytekin warned against underestimating Turkish oil trade because 32.7% of world’s oils consumption is shipped through Turkey. He elaborated on future natural gas pipeline projects for Turkey including the three competing projects within the Southern Energy Corridor: the Interconnection Turkey Greece Italy (ITGI), the Trans Adriatic Pipeline (TAP), and the Nabucco project. Last year the Nabucco consortium signed a €4 billion agreement with banks in Europe for the project. He spoke briefly about Turkey’s accession into the EU and said that the process of membership to EU will escalate in 2011.

Beginning the panel debate, Georgette Lalis, Director, Directorate A, DG Energy, European Commission, stressed that the EU and Turkey need each other. Turkey is positioned between some of the world’s biggest oil and gas producers and the world’s biggest consumer, the EU. There were new challenges for energy including energy security and climate change. Political instability in the Mediterranean neighbourhood and recent events in Japan have caused concern about nuclear safety.

The EU is actively responding to challenges in the 2020 strategy with an energy strategy focusing on five pillars: promoting energy efficiency, ensuring free flow of energy with safe infrastructure, secure and safe supply of energy, innovation and making better use of EU’s geopolitical weight. Turkey is of great geostrategic relevance to the EU with great potential for renewable energy as well as becoming a bridge between regions. Nabucco is of strategic importance – the first intergovernmental steering committee for Nabucco is about to take place, with EU Energy Commissioner Günter Oettinger participating. The EU can share its experience with Turkey, which is facing significant energy challenges.

Turkey’s power sector reform has increased in the past years as well as a promotion of investment, which places it on the right track to attract investments. There are challenges related to gas – the 2001 gas market law was very advanced for its time, but has never been fully implemented, and Botas, Turkey’s national energy company, still has a monopoly. Major steps have been taken towards renewable energy for electricity production.

Regarding Turkey’s nuclear capacity Ankara plans to have 5% of its installed capacity for nuclear power by 2023, but there are questions whether Turkey’s legal framework can ensure levels of security and safety. EU and Turkey energy cooperation is separate from EU accession and one does not exclude the EU and Turkey from pursuing the other.

Maxim Buyakevich, First Secretary, Permanent Mission of the Russian Federation to the EU, said that the relationship between Turkey and Russia has been widening and Turkey is one of Russia’s biggest clients for gas. The South Stream project is of the highest priority for Russia and should be able to be implemented soon, but Russia is ready to supply gas to Turkey through any pipeline.

Russia is also active in Turkey’s nuclear sector, currently building a nuclear plant on the Mediterranean coast. Mr Buyakevich also stressed it was important to depoliticize projects like South Stream and Nabucco. These would compete for the same resource base, and both pipelines could supply the EU.

Vladimir Socor, Senior Research Fellow at the Jamestown Foundation, stated that the Nabucco pipeline has been postponed repeatedly, but is better than competitors such as TAP and ITGI: it has better international agreements, it has a letter of intent from the three biggest financial institutions for as much as €4.5 billion, and it fits well with EU policy. The contest between TAP and ITGI was unnecessary and unhealthy because they are not strategic projects but rather initiatives with narrow and commercial interests, and the volume they were promising was not strategic. Their location was also problematic with terminals in southern Italy, which is marginal and already highly diversified.

Mr Socor applauded the Commission and President of the EU for reaching out to Turkmenistan after many years. Once Turkmenistan decided to diversify away from Russia this opened the door for Turkey to become a major transit country. Turkmenistan has made it clear that the gas would be for Nabucco and not for TAP or IGTI. South Stream is an anti-Nabucco project, which lacks credibility. Russia has not identified gas resources or funding sources for South Stream. The four reasons it continues to support the project are: to kill the Nabucco project; to block EU access to Turkmenistan gas so that Turkmenistan has to export to Russia; to blackmail Ukraine by threatening to shift massive volumes from Ukraine’s gas transportation into South Stream unless Ukraine agrees to share control of its transportation system with Gazprom and as a means to counter the EU’s third energy package, which calls for an unbundling of states and gas companies.

When asked about whether Commissioner Oettinger would attend steering committee meetings for the IGTI and TAP pipelines as he planned to do for Nabucco, Ms Lalis said that the Commissioner had no preference among the three. However, advancement is different between the three projects.

Asked if he really believed that Nabucco would be completed by 2017 and get 31 BCM of gas, Mr Socor replied that he liked Nabucco as a means to an end and that it would fulfil a need of diversification in countries that need it. Nabucco would supply sufficient gas for diversification and TAP would never get to 20 BCM, perhaps 9 to 10 maybe. However Turkmenistan would supply 30 BCM by 2017 because Turkmenistan will also have 10 BCM off shore.

Regarding the issue of the Turkey-Armenia border opening and potential interference with gas transit, Georgette Lalis said that the opening would be supported by the EU. Mr Aytekin added that Azerbaijan is a strategic partner for Turkey and Turkey is sensitive about harming its partnership with Azerbaijan vis-à-vis opening the border.

The Arab awakening: four views from the region
22nd November 2012

Event: Cooperation and geopolitics in the Black Sea: prospects and challenges
7th September 2012