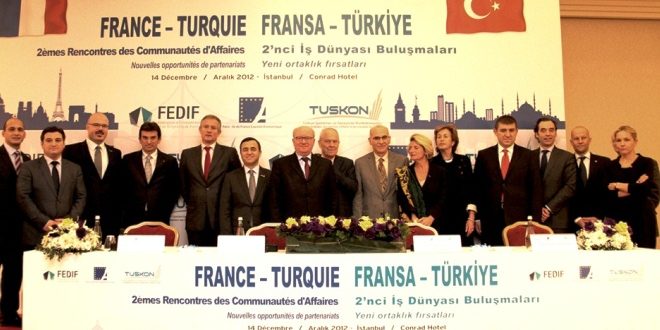 The Confederation of Turkish Businessmen and Industrialists (TUSKON) hosted the Prefect of Paris Daniel Canepa together with a delegation of business people on the occasion of the “2nd France-Turkey Business Meeting, new partnership opportunities Forum”. Canepa praised Turkey’s Economic performance during the Forum organised in partnership with The Federation of French Executives and Entrepreneurs (FEDIF) and Greater-Paris Investment Agency (GPIA).

“Turkey will be one of the major Economies in the short run. Deep reforms have been undertaken with resoluteness. We can easily see the entrepreneurship spirit of the private sector in Turkey. Your activities are a proof of that.” said the Prefect Canepa, who gave a speech during the meeting. He also explained the Greater Paris project which consists of the construction of 70 000 new houses and several new public buildings and invited the Turkish business people to invest in Greater Paris.

The President of Greater Paris Investment Agency (GPIA) Pierre Simon emphasized the growing attractiveness of Paris. “Despite the economic crisis, Paris continues to be one of the most important destinations. 500 big multinational companies have their headquarters or a representation in Paris”, he said. He noted that until today, they had hosted 15 million businessmen in fairs organised in Paris and added that they were attaching much importance to business delegations.

TUSKON President Rizanur Meral emphasized that important partnership opportunities were existing between Turkish and French business People. “Turkey’s bilateral trade with France reached over 12 bilion euros in 2011. However, this amount doesn’t represent our potential. We hope that these opportunities will be better evaluated and realized in the future”, he said.

Marie-Claire Bizot-Greggory representing Accor SA, one of the world leading hotel chaines, also gave a speech during the presentations given by the representatives of the private sector at the end of the Forum. She noted that they already had 10 hotels in Turkey and anounced that they were looking for places to build 50 new hotels precising that they were ready to collaborate with Turkish business people to achieve this goal.

The Arab awakening: four views from the region
22nd November 2012

Event: Cooperation and geopolitics in the Black Sea: prospects and challenges
7th September 2012